That’s right…I like Whiz on my sandwich! Let make that clear…I like Cheese Whiz on my Philly Cheese Steak! Last night I was wondering what to do with my left over prime rib that we cooked for New Years….on my way home it hit me…Philly Cheese Steak!!!!! Not the imitation crap you find around here….some cheep beef shredded with onions peppers and provolone or even worse…mozzarella cheese. I’m talking the real Philly Cheese Steak.

So my craving this delectable treat sparked a debate last night on Facebook…to Whiz or not to Whiz. I thought I’d give you my take on the Philly Cheese Steak.

When I got home last night I took the left over prime rib out of the fridge got out my meat slicer…yes I have a meat slicer (well my brother-in-law has one that I haven’t returned)…(yet). I placed the setting at shave and began slicing the prime rib into thin shavings…a little more than a pound or so left. I threw it in the crock to heat it up while i left for the store for some Italian Rolls and “The Whiz”. When I returned home I could smell the seasonings used to cook the prime rib filling my house…oh man!!!! I broke out the skillet, warmed the rolls, heated up the Whiz… that’s when the Huge Cheese Whiz accident happened…don’t microwave the Whiz…just saying! Almost had to buy more Whiz 🙂 After the clean up…over course I had to sample the Whiz…I pulled the the shavings from the crock and placed them on the skillet and with my two turners…(you call then spatulas) I proceed to chop and slice at the steak until its perfect for the sandwich. I then place a generous amount on the Italian roll  and you guessed it mounds of Whiz!!! and I add the mustard for my liking. I ate so much it made me sick…just like the first time I ever had one of these Philadelphia famous treats. 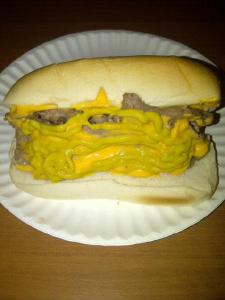 So the debate is this…to Whiz or not! For my part I give you this. I was first introduced to the Philly Cheese Steak by my ex wife’s friend…a Philadelphia native and while I was visiting in Philadelphia…She made one…ah…two for me, and in the way I did above. So just like most people…the first way you are introduced to something…its the only way! In my defense I give you the following;

A cheesesteak, also known as a Philadelphia cheesesteak, Philly cheesesteak, cheese steak, or steak and cheese, is asandwich made from thinly-sliced pieces of steak and melted cheese in a long roll. A popular regional fast food, it has its roots in the city of Philadelphia, Pennsylvania.[1]

Now to support my claim….again from Wikipedia;

Cheez Whiz, first marketed in 1952, was not yet available for the original 1930 version, but has spread in popularity.[17] A 1986 New York Times article called Cheez Whiz “the sine qua non of cheesesteak connoisseurs.”[18] In a 1985 interview, Pat Olivieri’s nephew Frank Olivieri said that he uses “the processed cheese spread familiar to millions of parents who prize speed and ease in fixing the children’s lunch for the same reason, because it is fast.”[19] Cheez Whiz is “overwhelmingly the favorite” at Pat’s, outselling runner-up American by a ratio of eight or ten to one, while Geno’s claims to go through eight to ten cases of Cheez Whiz a day.[16] 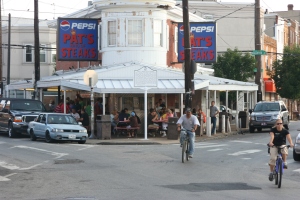 King!!!http://www.patskingofsteaks.com/ note the picture on the home page of the Cheese Steak…Yes! That is Whiz!!! The first time I ate at Pat’s was awesome…we were clubbing in Philly then were going to to Shore after..but we stopped by Pat’s on the way to get a late night snack…it’s pretty hard to eat one of those things and drive to Jersey…just saying!

So now that I’ve supported my claim with a little history and incite…try one for yourself!!! or come to my house and let me Whiz on your Cheese Steak!